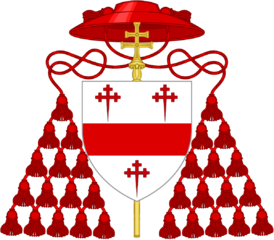 ) of the Holy Empire of Reunion, however distant for years.
We are enjoying the fine hotels of Karnia Ruthenia but we'd be delighted to have a proper place for the representation of the Micronational Church in KR.
In Domine,
+D. Ruy cardinalis de Tavares Lira
Apostolic Nuncio near the Empire
Apostolic Field Vicar
Holder of the Most Noble Order of St. Peter