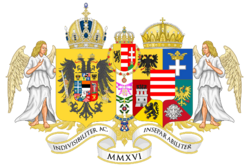 THE KINGDOMS AND LANDS OF THE CROWN OF RUTHENIA AND THE LANDS REPRESENTED IN THE COUNCIL OF KARNIA
HIS IMPERIAL AND ROYAL MAJESTY’S OWN OFFICE
In this Twenty-ninth day of June in the year Two Thousand and Seventeen, comes to public the Emperor of Karnia and King of Ruthenia, express His will, using the powers granted to Him by the Constitution, in accordance with Article 7, Chapter I, DECIDED:

ARTICLE I. IN consequence of the highest resolution of 10 September 2016, will be awarded to Micro Store the title of Imperial and Royal Purveyor.

ARTICLE II.THIS title keep as long as the business is operated by the current administrative constitution. Thereof, will have the right to use the imperial eagle at your company.

We ordain all authorities to whom the knowledge and execution of the present Decree belong, that comply with and enforce and obey its contents as fully as it is contained.
PUBLISH et COMPLY.
Done and passed at Hofbau Palace, at the Imperial and Royal Majesty’s Own Office, on the Twenty-ninth day of June in the year of Two Thousand and Seventeen of grace of Our Lord Jesus Christ.

Return to “Imperial and Royal Decrees”