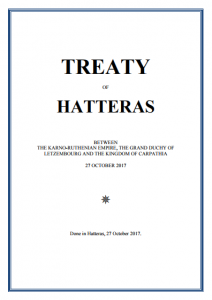 It was published yesterday by His Royal Majesty, the King of Carpathia and Grand Duke of Letzembourg, the Treaty of Hatteras, signed by him and His Imperial Majesty, the Emperor-King in the group M.A.G.N.A, on Facebook.

The treaty is the formalization of an agreement between the King of the Carpathia and Grand Duke of Letzemburg and the Emperor-King to simplify the administration of the two territories that since the Reconquest of the Carpathia, has the same sovereign.

The agreement does not extinguish territories, but unifies the administrative management of the two territories: the Grand Duchy of Letzembourg, located in the United States of America and the Kingdom of Carpathia, on the border between Romania and Ukraine.

The treaty still predicts that there will be a cultural integration between the territories and that despite the administrative union, the territories are still subject to the union treaties that made them part of the Empire.