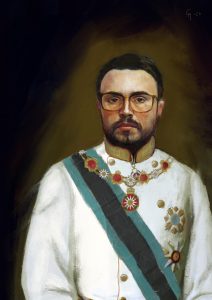 Oscar I is the Emperor-King of Karnia-Ruthenia and Occidian Emperor, among several other positions. He was born in São Paulo to a relatively modest family of Hungarian origin from minor nobility and rose to prominence when he became King of Ruthenia, succeeding his father, in the micronation he founded on 19 November 2014 and what would become, in 2016, the Karno-Ruthenian Empire, one of the most successful micronations of its time.

Although largely considered to be conservative, Oscar spent his early reign promoting democracy through legislation in his domains. He changed the course of Ruthenia, created to be an absolute monarchy, to turn the micronation into a constitutional monarchy.

During his reign, Ruthenia witnessed a steady expansion, comprising several micronational projects which gave varying degrees of autonomy, reaching its apex in the signing of the Karno-Ruthenian Compromise of 2016, hence assuming the Imperial Crown of Karnia and transforming the Kingdom of Ruthenia into the Karno-Ruthenian Empire under his Dual Monarchy.

On 07 August 2020, he also became the sovereign of the North American Confederation, later reformed into the Occidian Empire. By this measure, Oscar is known as the only sovereign of two empires at the same time, something only achieved macronationally by Francis II, Holy Roman Emperor.

He also served as the first Defender of the Imperial Circle following its establishment in 2020, is a leading figure of the Brazilian sector and one of the founders of the Conference of Santiago.