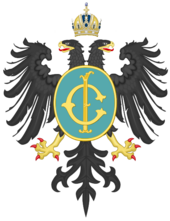 THE KINGDOMS AND LANDS OF THE CROWN OF RUTHENIA AND THE LANDS REPRESENTED IN THE COUNCIL OF KARNIA HIS IMPERIAL AND ROYAL MAJESTY’S IMPERIAL CHANCELLOR OFFICE
An executive decree concerning the Ministry of Justice
His Excellency, the Imperial Chancellor of the Karno-Ruthenian Empire, in exercise of the powers conferred on him, thinks it desirable to make this Order to the purpose of resolving a vacancy within the Imperial Ministries, and in full harmony with the Imperial Constitution, decrees the following:—

ARTICLE I. THAT, given the discrete and necessary separation of the offices of Minister of Justice and the Palatine of the Court of Justice, which resulted in the departure from the former post of His Serene Highness, Prince von und zu Hochbach-Kundarheim, in favor of the latter, AND, following consultation with the Justice Prince von und zu Hochbach-Kundarheim, Margrave Hochbach, and His Imperial Majesty, Oscar I, the following is herewith decreed,

ARTICLE II. That the Right Honourable Johannis Sauerbronn be called forth, to assume the duties, honours and position of the Minister of Justice of the Empire of Karnia-Ruthenia, said assumption to come into effect at Noon, Persenburg National Time, on the Seventh Day of July, in the Year of Our Lord, Two Thousand & Nineteen, to serve at the pleasure of His Imperial Majesty, or until such time as he may see the need to depart such post of his own accord.

?? Executed at the Ministerpalast, Persenburg, this Fifth Day of July, in the Year of Our Lord Two Thousand & Nineteen. — His Excellency, the Imperial Chancellor.

His Royal Highness, Michael I, the Grand Duke of Nordinsel
Prince of Scotia and Duke of Appinfeldt
Count of Breisgau, Duke of Solisia
Knight of the Order of St. Stephen
Knight First Class of the Order of the Lion
Field Marshal of the Karno-Ruthenian Army
Aide-de-Camp of His Imperial and Royal Majesty
Minister of War
Imperial Chancellor
Top
Post Reply
1 post • Page 1 of 1